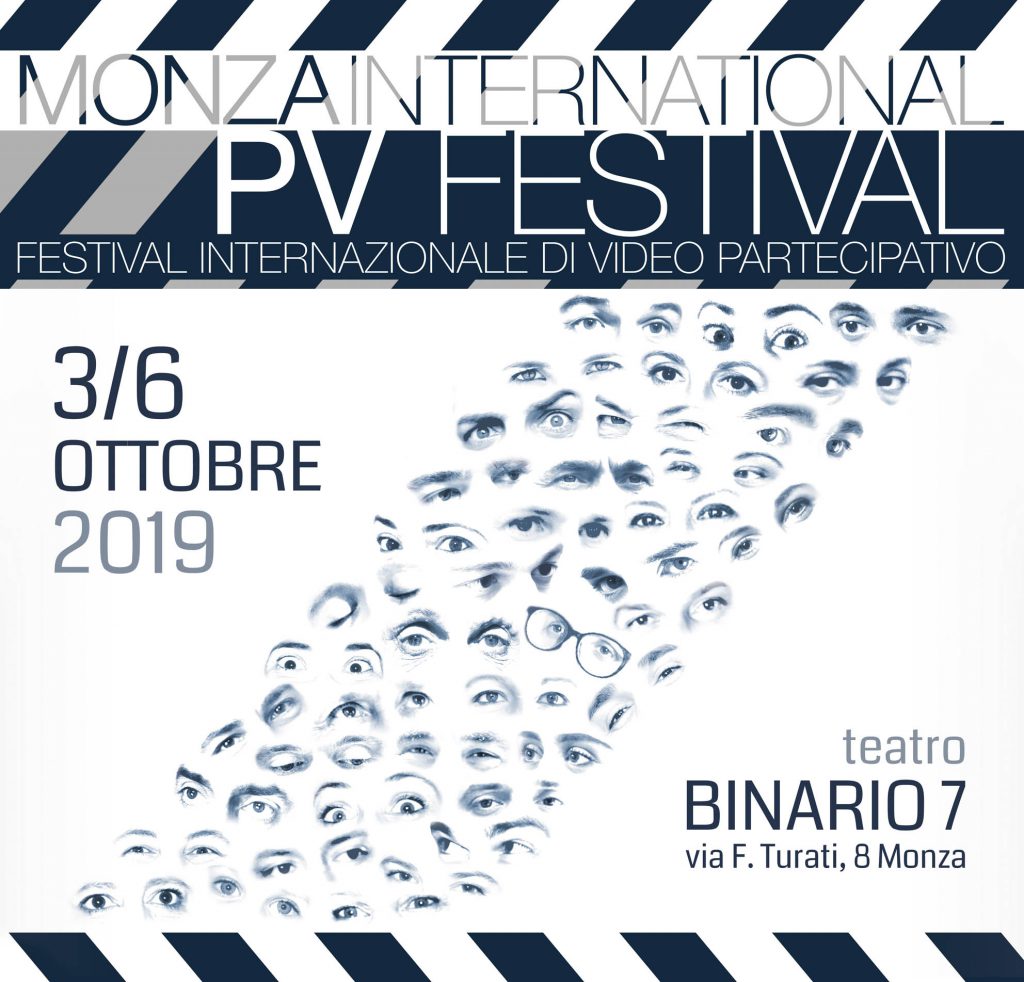 Keynotes, workshops and screenings will enable educators, trainers, facilitators, teachers and students to learn the most innovative and latest techniques and to share ideas and perspectives. International PV FESTIVAL is the opportunity to get to know about recent Italian and International PV projects on different topics and in various problematic contexts, as well as to compare methodologies and points of view.

The four-day free event allows people to acquire knowledge on the potential of Participatory Video (PV), a well-established methodology around Europe which is gaining awareness in Italy. Participatory Video is a technique in which a group of non-professional people of a specific community can create and develop their own movie about a relevant topic for that community.

The identity: between reality and representation is the leading theme of the Friday evening event with participation of local authorities, authors and participant to the training program.

The festival is organised by LIBERI SVINCOLI, a collective of professionals coming from the show business and communication area. Liberi Svincoli, since 2009, develops cultural projects based upon social and cultural themes.

Participatory Video: a tool for empowerment and advocacy

Transformative Learning Through Participatory Video – Owning the Message and Advocating For

Filmmaking as a chance for a change: the PVCODE method

How to show the true self. Digital storytelling for empowerment

ANOREXIA – participatory short movie generated by a group of anorexic women in Germany (20’).

UNICITAS MODOETIAE participatory short movie and social inclusion project created by a group of teenagers from Monza, Italy (12’). After the screening the filmmakers, performers and the representatives of the project “Tutta nostra la città” will be available for a Q&A with the audience. The project “Tutta nostra la città” has been developed within the tender “giovani protagonisti” of the Municipality of Monza in partnership with Diapason Cooperativa Sociale and Associazione Antonia Vita.

NO BARRIERS FOR THE LOVE OF SPORT a sport documentary/reportage realised by disabled reporters of the “Associazione Sportiva Silvia Tremolada” with the support of Fondazione Tavecchio (performers and project leaders will be in the audience).

IDENTITY: BETWEEN REALITY AND REPRESENTATION

An evening of participative projects coming from different nations, always with the presence of performers and authors, introduced by Deborah Morese

OSTAGGI participative short movie realized within the project “AQR per il sociale” about Locri and Aspromonte in Calabria, Italy (12’). After the screening the filmmakers, performers of the company Advisors (partner of the AQR Group) and the PVCODE trainers will be available for a Q&A with the audience.

STREET LIFE by Maarten Hendriks, shot with the Goma gangs in Congo (38’) with the presence of the author.

SAMIRA by Nicola Mai, ethno-fiction film based upon the life of the transgender Samira-Karim in Marseille, France (28’) with the presence of the author.

The power of self-narration in documentary film workshops: the case Flying Roots

FLYING ROOT a participatory documentary produced by a group of adolescents from Esquilino neighbourhood, Rome, Italy (37’).

PV CODE ACADEMY with the screening of SIETE FUORI and its making of (12’ + 7’) short movie dealing with the role of the educator and social inclusion. With the presence of the educators from Cooperativa Solaris who shot the movie at the end of the advanced course.

TRAVEL a participatory documentary dealing with the story of Joy, a Nigerian prostitute in Marseille, France (63’).

Iain Shaw – Development Team and Company Director at Media Education, Edinburgh, UK. Innovator in using participatory video and digital media as tools for consultancy and presenting information to decision makers and the public. Considerable track record with wide diversity of groups from professional management through to staff and service users as well as special needs groups of all kinds. Member of Collaborative Action Research Network (CARN) and a key organiser on team for CARN International Conference 2020 – Dundee. Fellow of RSA, Chair of Bridgend Growing Communities – organic food cultivation. Treasurer of Film Access Scotland.

Cristina Maurelli – Cristina is a documentarist, TV programs and stage productions writer, director and playwright. She teaches Performing Arts at University of Brescia (Italy) and she previously taught Scriptwriting at Civica Scuola del Cinema School of Milan. She developed the PVCODE method that she tested in different multi-problematic communities. She is training educators, social workers, facilitators, and teachers at PVCODE Academy.

Federica Pesce – Federica is co-founder of Melting Pro (www.meltingpro.org). Designs and coordinates national and international cultural projects related to informal lifelong learning and to the development of heritage. Her current challenge consists of transforming information into knowledge through digital storytelling techniques and social design practices.

Marina Nguon – Originally from Cambodia, Marina began working in the humanitarian field during a medical mission to the Ratanakiri ethnic minorities area in Cambodia in 2015. Fascinated by video editing and convinced of the potential of the media to help in education, Marina founded Meliponi with Adrien in 2016 to make the most of her passion and her job at the service of the most vulnerables. She produces participatory video projects and documentaries on social, environmental and health issues and organizes training of participatory videos in France.

Soledad Muñiz – Soledad is the Head of Innovation and Development at InsightShare (UK). She specialises in participatory communication with particular skill and experience in deploying participatory video in international development. She has over 10 years experience researching, planning and implementing numerous participatory video projects. Soledad has worked in more than 30 projects in Europe, Latin America, Africa and Asia in a range of issues including environment, indigenous peoples, gender equality and youth & children’s rights. She has experience in capacity building, community development, research and monitoring & evaluation.

Michele Aiello – Director of documentary films and participatory video trainer for adults, teenagers and children. He is partner of ZaLab, an independent production company, and he collaborates with the public radio station Radio3 RAI, the Theatre of Rome’s permanent workshop for disabilities, and NGOs. He holds a Master’s degree in International Relations and he is specialized in armed conflict and marginalization of minorities in the Sudan. Occasionally Michele works as multimedia freelance journalist. Among his latest works: Future By S (in production, 2019); Violent Borders (2018); Paese Nostro (2017); A School of Their Own (2016).

Nicola Mai – Nicola is a sociologist, an ethnographer and a filmmaker whose writing and films focus on the experiences and representations of migrants working in the sex industry. Through participative ethnographic films and original research findings he challenges prevailing representation of the encounter between migration and sex work in terms of trafficking, while focusing on the ambivalent dynamics of exploitation and agency that are implicated. In 2016 he was awarded an ERC Consolidator Grant (Sexual Humanitarianism: Migration, Sex Work and Trafficking – 2016-2020) to study impact of anti-trafficking legislation and initiatives on the governance of migration and on the sex industry in the global North by analysing migrant’s own understandings and experiences of agency and exploitation in Australia, France, New Zealand and the US. Nick is the author of Mobile Orientations: An Intimate Autoethnography of Migration, Sex Work, and Humanitarian Borders.

Elena Verri and Chiara Gugliotta – They are members of the same working group – together with Emilio and Matteo Caravatti – in the studio caravatti_caravatti architetti in Monza. Focusing mainly with issues related to community belonging, social engagement is at the core of their works. Their experience in working and designing on social and geographical marginality areas is especially reflected on their work in West Africa.

Emanuela Mancino – Professor of Philosophy of Education and Pedagogical Research Methodology at Università degli Studi di Milano-Bicocca. Emanuela is one of the founders of Accademia del Silenzio. She is the scientific director of the advanced courses of Sciences, Methodologies and Poetics of Storytelling. In cooperation with the film library of Milan (Cineteca di Milano), she is the scientific director of the workshop: Cinema philosophy and pedagogy. She is headmaster of the Autobiography School at Casa della Cultura in Milan as well as founder and developer of cinema and autobiography projects at Casa della Cultura in Milan. She is part of “Film Corner. Online and offline activities for Film Literacy” and “The film corner reloaded” which aim at promoting and provide education for the film literacy.

Tessa Boeykens and Maarten Hendriks – Tessa and Maarten are both PhD researchers from Ghent University at the History Department and Conflict Research Group respectively. Together, they founded the Ghent International Participatory Video Festival (PVF#) in 2018. Tessa is an expert in visual & participatory research methods, the politics of history and transitional & environmental justice. Maarten is specialized in visual ethnography, conflict & violence, vigilantism and youth.

Chris High – Chris is a Senior Lecturer in Peace and Development at Linnaeus University, based in Växjö, Sweden. His work centers on learning and communication in sustainable development, and he has been involved in applied scholarship on rural development, adaptation to climate change and participatory methodology for the last 20 years. As an academic engaged with participatory video, he was part of several networks that worked to establish a scholarship of PV in the 2000s, convening the PV-NET methodological innovation network in the UK, and the international PV: Better Practice initiative which brought together practitioners, academics and activists from around the world through a series of online and face-to-face events. His more recent work has begun to focus on the institutional context of participatory work, examining the rites and rituals of the project state.

HOW TO GET THERE

Binario7 is just outside the Monza Train Station’s back exit.

Parking: in front of the theatre there is a big paid parking area, on the back there are some free parking places. Another paid parking is 50 meter from the Theater beside the Train Station.

The festival is free. Send a mail to: info@liberisvincoli.it