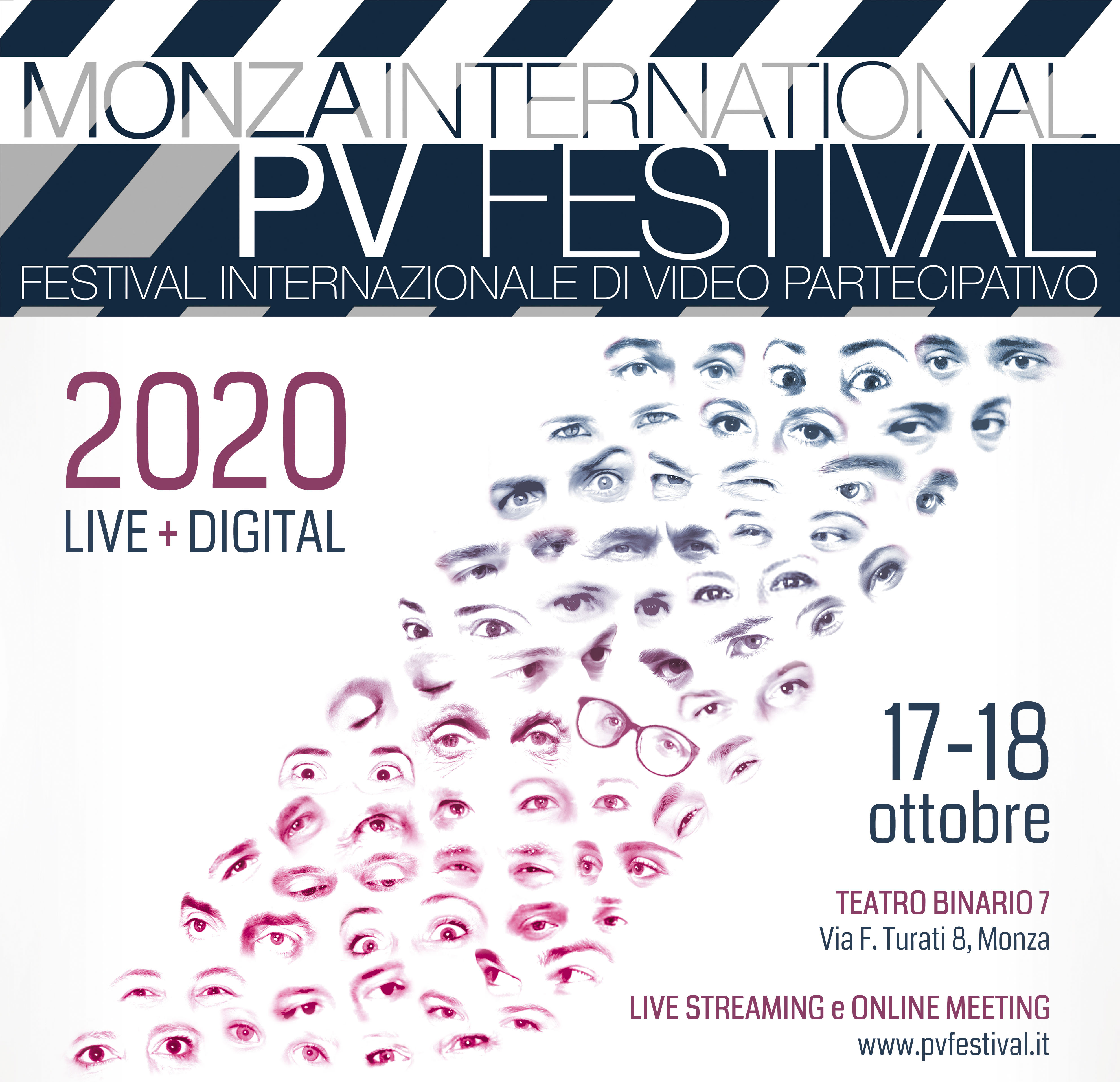 Expect a great roster of Italian and international speakers. Saturday morning sessions are dedicated to participatory videomaking with teens and children, while the afternoon is all about different production experiences.

Wrapping up Saturday evening is an international talk show on the future of participated cinema with speakers from prestigious universities around the world.

Sunday morning is dedicated to Italian experiences, while in the afternoon we talk about Online PV and new media.

The Festival main sponsor AQR Group headlines Sunday afternoon’s event, with a showcase of the participatory film realized by its employees during the pandemic.

This year’s fully free-entry edition can be attended via live streaming or in presence at Teatro Binario 7 in Monza.

The festival is a collaboration with “Participatory Video Festival (PVF) in Ghent, Belgium” and has the patronage of prestigious italian and international universities.

All events are available with simultaneous translation.

Meet My World: Stories by the young people from the Peruvian Andes.

African Syllabary. Alphabet letters according to the youth of Nairobi slums.

The French experience of the Fédération Nationale de l’Audiovisuel Participatif.

Professional production of a documentary film starting from a participatory video workshop. Continuity and rupture in the case study of “Un giorno la notte”.

Excuse me, do you know where “Participatory Video” is going? Reality, challenges and the future.

Jackie Shaw Participatory Video then and now: How does it mediate social processes with marginalised groups.

Chris High What is PV for? Values, activism and social justice.

THIRD ROUND – DISCUSSION AND CONCLUSIONS

“I see myself well”: video as educational tool for people with disabilities. Experiences, trials and future perspectives.

AQR GROUP – The meaning of life according to us.

The project “Together we can”, developed remotely during the pandemic by a group of AQR employees, turned participated storytelling into an intense and moving collective film about what truly matters to each one of us.

Cristina Patiño Sheen – Cristina is a London based Self-Shooter Director who grew up in Lima, Peru. For the past 3 years she has worked as a Creative Producer for the History Channel at A+E Networks UK, and as Self-Shooter Director for Criskcracker Films. She is a bilingual director of documentaries, short films and promos and a proud Ambassador of the charity Amantani. Her main goal as a filmmaker is to connect with people and capture genuine emotions. In the past, she worked as an Editor of TV commercials, Assistant Director of short films and worked as 1st Camera Assistant at the London 2012 Olympic Games.

Angelo Loy – Social documentary director and Participatory Video facilitator. In both roles he has primarily operated in Africa. In Nairobi he has worked for ten years on a PV project involving street girls and boys during the course of their rehabilitation.

Chris Lunch – Chris has worked on Participatory Video projects around the world since his first project with nomads and farmers in Central Asia back in 1999. He co-founded InsightShare with his brother Nick twenty years ago. Chris leads the overall strategy, operations and financial management of the organisation and continues to facilitate projects in the field. Chris studied Anthropology and Archaeology at Oxford University.

Marina Galimberti – Marina is Italian and lives in Paris. She is director and producer of documentaries and multimedia installations for TV, cinema, cultural centers and international NGOs. She teaches visual arts at the Faculty of Cinema and Sociology of the Paris Val d’Essonne et Paris Ouest Nanterre La Défense University.

Michele Aiello – Director of documentary films and participatory video trainer for adults, teenagers and children. He is a partner at ZaLab, an independent production company, and he collaborates with the public radio station Radio3 RAI, the Theatre of Rome’s permanent workshop for disabilities, and NGOs. He holds a Master’s degree in International Relations and he is specialized in armed conflict and marginalization of minorities in Sudan. Occasionally Michele works as multimedia freelance journalist. Among his latest works: Future By S (in production, 2019); Violent Borders (2018); Paese Nostro (2017); A School of Their Own (2016).

Emanuela Mancino – Professor of Philosophy of Education and Pedagogical Research Methodology at Università degli Studi di Milano-Bicocca. Emanuela is one of the founders of Accademia del Silenzio. She is the scientific director of the advanced courses of Sciences, Methodologies and Poetics of Storytelling. In cooperation with the film library of Milan (Cineteca di Milano), she is the scientific director of the workshop: Cinema philosophy and pedagogy. She is headmaster of the Autobiography School at Casa della Cultura in Milan as well as founder and developer of cinema and autobiography projects at Casa della Cultura in Milan. She is part of “Film Corner. Online and offline activities for Film Literacy” and “The film corner reloaded” which aim at promoting and provide education on film literacy.

Chris High – Chris is a Senior Lecturer in Peace and Development at Linnaeus University, based in Växjö, Sweden. His work centers on learning and communication in sustainable development, and he has been involved in applied scholarship on rural development, adaptation to climate change and participatory methodology for the last 20 years. As an academic engaged with participatory video, he was part of several networks that worked to establish a scholarship of PV in the 2000s, convening the PV-NET methodological innovation network in the UK, and the international PV: Better Practice initiative which brought together practitioners, academics and activists from around the world through a series of online and face-to-face events. His more recent work has begun to focus on the institutional context of participatory work, examining the rites and rituals of the project state.

Jackie Shaw  – A pioneer of Participatory Video, founding-director of Real Time, UK (1984), and co-author of a definitive guide (Shaw & Robertson 1997).  Jackie’s social psychology PhD built nuanced understanding of the practice realities, and during Participate (2012-14) with partners in 30 countries she used participatory video to bring the reality of poverty into UN deliberations. Currently Research Fellow at the Institute of Development Studies (IDS) she applies participatory video to drive community development, participatory action research and accountability processes with marginalised people in diverse contexts such as exploring conflict generated by green-energy development in Kenya.

Valentina Noya – Producer and visual storyteller, she is the director of LiberAzioni festival - art inside and outside the prison and currently works as culture producer for the national Museum of Cinema Association in Turin; as researcher on participatory video, she trained with InsightShare in Oxford. She is the producer of VR Free, a 360° format, virtual reality film by Milad Tangshir, officially selected at Sundance Film Festival 2020. She has a Master’s in Development, Environment and Cooperation. Her TEDx talk details her experience in Salvador.

Laura Stucchi – Educator, playwright and holistic counselor. She attended the PV CODE Academy, which resulted in the production of the participatory short film "Siete fuori". She conducts theater and theater-therapy workshops and carries out trainings at the Coop. Solaris. Founder of Follarthemya Association, director of the integrated theatre company Folle Idea. She works on the employment of participative and artistic methodologies in educational contexts, in particular with people affected by disabilities and in the field of personal growth.

Stefania Muresu – Stefania is a visual sociologist and director. She studied at the universities of Urbino and Seville, and is the author of documentaries and visual research. Since 2010 Stefania collaborates with the Association 4Caniperstrada as director, photographer and facilitator of workshops about audiovisual languages and Participatory Video. Sulla Stessa Barca (71 ', 2017, ITA) presented at the Visioni dal Mondo Festival, is her first feature film.

Maurizio Telloli – Teacher of A.M. disciplines in the Audiovisual/Multimedia section of the art high school Nanni Valentini. After graduating from the Istituto Statale d'Arte in Monza, he graduated from D.A.M.S. in Bologna in Semiology of the Arts with Omar Calabrese. He collaborates with several market research institutes as interviewer and communication analyst using semiotic methodologies. He teaches History of Scientific Thought at the ISA in Monza, where he also becomes Photography Art and Cinematography professor. He collaborates with institutions and individuals in the role of FSE trainer as an expert in photographic culture and web design.

David Montero Sánchez – is a lecturer at the Department of Journalism I (University of Seville). David’s current research focuses on the use of participatory video in on-line environments. He is the author, along with D. José Manuel Moreno, of the book "El cambio social a través de las imágenes. Guía a para entender y utilizar el vídeo participativo" (Los Libros de la Catarata, 2014) and "Videoactivismo y movimientos sociales" (GEDISA, 2015), co-edited with Dr. Francisco Sierra Caballero.

Mark Saunders – Award winning Independent filmmaker and founder of Spectacle - an independent media company. Mark Saunders has worked in community video since its beginnings at Oval Video 79-82. In 1982 he founded Despite TV, an innovative media co-operative based in east London. In 1990 he was a founding member of INURA (International Network for Urban Research and Action). His films have been broadcast in the UK and internationally.  His work has been presented in galleries including the Tates Modern, Britain, and Liverpool and at informal screenings, international festivals, lectures, public meetings and on national and international TV. He has lectured on media, community media and urbanism at numerous universities.